So, dig baby… I was at the—oh, I mean dA Poetry Lounge last night. To be fair to these young, MTV people here is their listing at poetryflash.org:

First of all, the gate is packed. It’s like a storming the Bastille thang. There is no order among the people—that’s why Nord America needs a strong military: 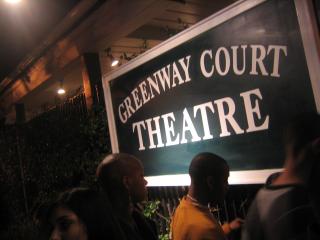 That sister lady with the cropped hair was very attractive (—but what’s really sad is that many of you colored folk reading this may actually think I am being sarcastic—no she is attractive): 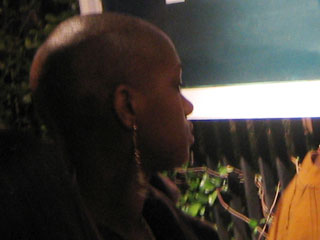 Once we got in, the animalistic process of getting the open mic’ begins: 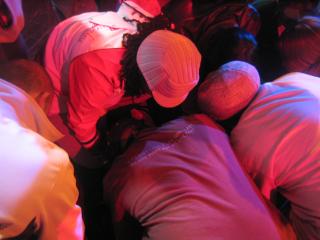 A poet who recites verse worshipping peace and love would look very ironic trying to fight for the mic’ like a pig feeding at the trough. Fortunately, very few poets last night were really down with styles of grace and peace. So for them this behavior is acceptable. In fact, here’s what reads on that t-shirt: 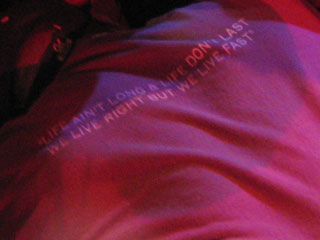 I have been to dA Poetry Lounge four times in a row now and I still can’t get the open mic’. I am trying not to disappoint this young woman: 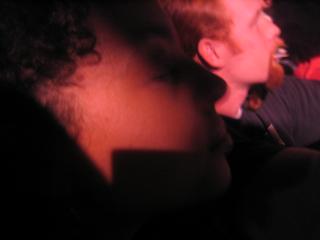 She was in grade school when I was really hitting the streets and reading furiously. I did not need to consider fighting at the pig’s trough because, in those days, Los Angeles was full of inner-city places to read that had more style and grace—and I got to pay respect to the now closed Midnight Special Bookstore in Santa Monica as well. Starbucks and Borders fucked it up. But back to last night. Here’s the post-pubescent host at the mic’: 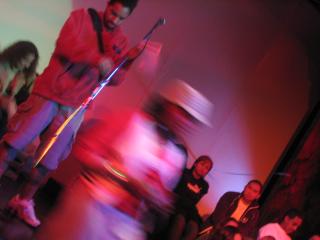 He’s a charming guy (probably on the heels of Saul Williams juice) that brought his little daughter to last night’s show—and, for those concerned parents counting, this first show ended at 11pm. I’m not trying to player-hate. I’m just saying that some parents put their children to sleep earlier.

And I’m not trying to say that I was the oldest guy in ‘the club’—there were older poets who read last night. But I am sure these guys were smart enough to call these people first (with maybe a little sprinkle of payola? … cool with me… I’ll pay to avoid the trough). Overall, many of the Lounge poets are very talented and some of them do ‘deserve’ to be on Tee Vee—even MTV.

Feeling sorry for me? Good. Buy my chapbook at lulu.com or read a poem or two from the fogy with just a few years on to 40.

Points taken. I can dig it: let's go.