Does Stanley Nelson Have Negro Problems?

You know that title up there is coy and uncalled for… I have no idea who Stanley Nelson is. All I know is that he is a MacArthur Foundation “genius grant” recipient (which places him in the company of the likes of Kara Walker) and that the son of Marcus Garvey finds his work markedly inferior. When you make a film about Marcus Garvey and his son finds gross factual and logical errors (which are to be distinguished from simply not liking the film), then I grant myself the permission to be coy. Thanks, Bryan. You’re welcome.

You know, at some creative artists of color meeting, years ago, some strapping six-foot tall “black guy” with a black, leather, Maplethorpe appointment book tried to explain the world to me in a tone of voice that reminded me of a condescending, single, white female, elementary school teacher that plays folk guitar and makes tangrams with long, wavy flaxen hair. I mean this guy was struggling between trying to “help the less fortunate” and not wasting his time. And I am sure Stanley Nelson would have the same Negro problem. How do you keep your appointments with the names in the Maplethorpe book and still feel like some kind of blackness? I mean just look at the expression on DJ Spooky’s face. 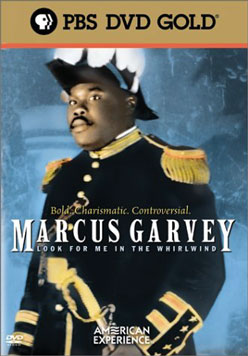 Experience suggests to me (and I remind you that I have worked with and around professional filmmakers here in Los Angeles—which does suggest “Hollywood”) that what gets guys like Stanley up many mornings is the consolation that Black people like me are envious of him. We can sit here and throw stones at him but we would love to trade places with him at the drop of the soap in the Maplethorpe shower. I am just repressing my patriarchal “feminine side” with “macho bullshit African rhetoric.” Right?

One of the side-effects of my continuing success is to teach any young person willing to learn that people like Stanley Nelson making a film about Marcus Garvey are no different than people like Steven Spielberg making a film about Marcus Garvey. And the assumption here is that Stanley Nelson would genuinely regard the previous sentence as a compliment.

The original (which means African) purpose behind storytelling is to construct a portable data storage device that contains the ancestral information necessary to thrive in the current environment. Imperialist Europeans tell lies to protect their children from harm. Africans provide correct information in an entertaining format to protect their children from harm. The late, great Richard Pryor damn-near personifies the modern Black interpretation of this standard. Most of these Negroes with Maplethorpe appointment books have no children (or they are raising confused colored children with excellent posh diction) so for them this issue is foundationally meaningless. But for me, please take a look at “Letters to the Editor about a PBS Documentary” by Dr. Julius W. Garvey, M.D. here at kintespace.com.

Interesting retort, I'll have to find the PBS Marcus Garvey piece that you describe. Actually, I have found most of the PBS documentaries to be very informative. For instance, the Rwanda Genocide discussion was quite rivoting and dare I say factual to the extent that it captured the horrors of the massacre. It even paid respects to the some of the Kenyan freedom fighters. You should peep it if you get an opportunity.