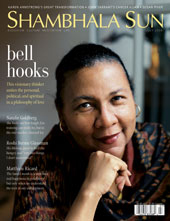 bell hooks on the cover of the July 2006 issue of Shambhala Sun leads me to an excerpt from her article:

More than thirty years ago, when I first began to think about Buddhism, there was little or no talk about Buddhism and love. Being a Buddhist was akin to being a leftist; it was all about the intellect, the philosophical mind. It was faith for the thinking “man” and love was nowhere to be found in the popular Buddhist literature at that time.

This immediately reminded me of Amiri Baraka’s remarks about being a Buddhist—and a communist—in our kintespace.com streaming audio feature “Amiri Baraka: Somebody Blew Up America.” bell hooks’ commentary sheds more light on a general idea on a galactic scale (bigger than a ball park) of what might have been going on in Baraka’s mind back in the day—before he ‘stopped being a Buddhist.’

By the way, you can stream bell hooks audio at as well. Listen to “bell hooks: Connecting Self and Community” here at kintespace.com.

Interesting, but an odd claim bell hooks is making, typical of the instutitional race-class-gender analysis she's helped to forge. One find it hard to read Dwight Goddard's Buddhist Bible (the book that Kerouac carried with him everywhere) and not hear the emphasis on love:

“In these days when Western civilization and culture is buffeted as never before by foreboding waves of materialism and selfish aggrandizement both individual and national, Buddhism seems to hold out teachings of highest promise. . . . It may well be the salvaion of Western civilization. Its rationality, its discipline, its emphasis on simplicity and sincerity, its thoughtfulness, its cheerful industry not for profit but for service, its love for all animate life, its restraint of desire in all its subtle forms, its actual foretastes of enlightenment and blissful peace, its patient acceptance of karma and rebirth, all mark it out as being competent to meet the problems of this excitement loving, materialistic, acquisitive and thoughtless age.”

Likewise, Snyder and Whalen were totally immersed in, and discussed and wrote, the language and practice of compassion. Actually, it's just absurd to claim that the "early Buddhists" in America cared little about love. They knew that compassion was the core of Buddhist practice, and sought to express it in their politics. Another over-reaching, totalizing race-class-gender analysis is just what we need. bell hooks, new flash: the 1990s are over, everyone knows the histcon program is a joke, and e.e. cummings beat you to your trademark lower-case self-branding technique. So, lighten up. Have some love for the persons who populate the past, and let's move on to do something about the real racists, classists, and sexists who actually do run the show.

i have no context for my comments except this post - compassion is not the same as love - you have compassion 'for'which infers a dichotomy...a division...two sides...and when there are two sides there is always a power relation and when the division is white/ black - poor/rich - male/female it ain't equal. Love is equal there is no power relation.... love in the Buddhist sense (I think) exists outside of objects, it is whole, total in and of itself - it exists in the universe 'unbestowed whereas compassion is a bestowal from one to another, the 'bestower' has the power...how can this be love?