This title, ‘OK Bill Gates’ is supposed to make you think of “Karma Police” by Radiohead, the album OK Computer. This is what you get, when you mess with us. But for a better set of words about “A New Role for Bill” let Dave Winer kick ass on the topic. As Carl Franklin bleeped out four-letter words at Adobe on a recent episode of one of his vehicles, Dave Winer can really rip into Bill Gates:

Why do they need two guys to take Bill’s place? Even he admits the “software architect” thing was bogus. The only new architecture to take hold at Microsoft during Gates’s tenure was RSS, and we all know where that architecture came from.

Dave Winer is, of course, referring to himself. Dave is a great warrior of technology so this kind of remark may sound “stupid” and swarthy to the Michael Arringtons of the Othello stage, chock full of Iagos. But I understand where he, and Little Richard, is coming from: yes, Dave Winer is the architect of distributed computing for the publishing masses and, yes, Little Richard is the architect of Rock-’n-Roll—as gay white people know it.

I admit, in public, that my Microsoft holdings are over $1000US in the red. But I hold these stocks for another kind of “stupid” warrior code… One of Microsoft’s violent tactics (which was probably some kind of anti-trust violation), was to provide “competitive upgrade” versions of its software. This means that a twenty-something, Black dude in the 1990s can walk into an Office Depot—straight off the street—and buy a “primitive” relational database system, like Microsoft Access and begin to encounter concepts that were erstwhile confined to the college campus (under a specific major)—and the corporate campus (Oracle’s comes to mind here)—or confined to six degrees of pre-Internet separation from open source social circles (Linux was announced in 1991—effectively, Microsoft was the Linux of my 1990s).

I refer to the ‘lenient’ upgrade options Microsoft provided in the 1990s as software laundering. I could upgrade Norton Q&A on one floppy disk for full-blown Microsoft Access. This meant that, yes, full versions of Borland Paradox, Microsoft Access and, perhaps, Lotus Approach, were all about $399 on the streets back in the day—but the “competitive upgrade” version of Microsoft Access was $99 (keep in mind that this “competitive” version was exactly the same as the full version). All I had to do was to find a floppy disk—any floppy disk—with one of the “competing” products (like Q&A) to help Microsoft illegally (?) flood the market with Microsoft Access. (By the way, Carl Franklin, this scheme could not work with Adobe products because, back then, they required a phone call directly to Adobe to activate upgrades—Microsoft was “smart” enough to let software take care of this task.) 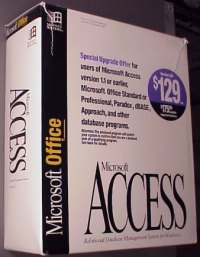 I do consider the possibility that my behavior might have had some effect on the livelihood earned by people at Borland and Lotus. But I’m going to take a wild guess that these people would assume that—just by looking at me—that I would probably end up in jail or working in retail. Moreover, these people have a better chance than me getting a new job elsewhere—and I’m even including the administrative staff—in spite of the fact that I have a real degree in physics from the University of California, Santa Barbara. (I will find every opportunity to mention my degree again and again until more Black men are in college instead of jail. I’m aware of the egocentric interpretations of this behavior. You see, the great successes of my life, so far, represent what the Prison Guard Union Lobby in Sacramento does not want “the general public” to see… Dudes like me should not be of common knowledge, dude. I’m sure some agent “for good” can plant drugs on me later.) But, anyway, I digress, back to my shady, floppy-disk scheme…

So when you are trying to make the Hollywood film about my life, then this one floppy disk was my “ticket out of the ghetto.” I went from MS Access MS-SQL to t-SQL like wildfire. So I feel like I ‘owe’ Bill G. some recognition for some of what most of his colleagues in the IT industry envy, despise and hate him for… This software laundering provided an extremely effective on-the-job training program that supports me and my family to this day. All of the poetry pages on kintespace.com are generated offline with database knowledge founded on hands-on experience starting with Microsoft Access. Bill Gates, with his foundation, will surely provide resources for the less fortunate (but somehow these “less fortunate” remain the “less fortunate”)—and some compliant media outlets (MSNBC) will sing heartwarming songs of great white kindness. But here, in the rasx() context, what Bill accidentally did for me is greater than stamping out diseases and hunger put in place not by natural causes. I was provided with an economic future, above and beyond photogenic subsistence triage.

This is what you get, when you mess with us…

Gosh - M$ the Linux of the 1990's ? Gee I don't know about that one. Sort of a stretch, in that Gates never intended for DOS to be shared or improved by the community. Heck, they didn't even know the internet existed until 96' ;)

Well, now you know the level of poverty out there for me in the 1990s. How did you get into Linux?

Understood.. I got into Linux out of necessity. The funny story is that I really only wanted to learn how to build webpages. Circa 1995, the Internet was all UNIX. So, if I was to learn HTML, I would have to learn UNIX. More specifically, I'd have to learn some flavor GNU text editor. I chose the venerable 'vi' and also Pico. I was happily building rudimentary webpages on pizza boxes (aka Sun Sparc1). Then I had an epiphany, "Why can't I do this at home?" Someone told me about the Sam's Publishing, Linux Unleashed. The book came equipped with the 1.2.13 kernel and Slackware v2.2.0. So I installed it on my AMD 486 DX, 1mb Cirrus graphics card, 32mb RAM. The rest shall we say is history. ok.. Prolly more than you ever wanted to know ..

Had I known about the importance of this book... well, no, I was still into Adobe products and I needed Windows for that... But then on the other hand I could have been running Linux in the background back in '95.