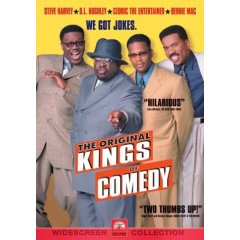 In the “extras” portion of the edition of The Original Kings of Comedy that was sitting in my DVD player, you would have heard Bernie Mac complaining jokingly/bitterly about not getting work in Hollywood. And it seems he had the “race card” in his wallet the whole time. Maybe this is just an Andy-Kaufman style joke coming from Bernie but The Original Kings of Comedy came out in 2000 and the significantly profitable The Bernie Mac Show came out in 2001.

Bernie Mac was breaking English in all the right down-home Southern places in The Original Kings of Comedy. He was my funny man—right down to the white meat. But The Bernie Mac Show places him out of the rasx() context and into an historical fold shared with the likes of Mantan Moreland—the inspiration behind the Herschell Johnson poem “We are not Mantan” archived here in the kinté space. So, to spin this issue up the economic scale, we can say that Bernie borrows from “a tradition” established by “trailblazers” such as “the great” Mantan Moreland. “Great,” meaning he made a lot of money—and, when you are a whore or an orphan, that’s all that counts. Poverty in America shows itself in strange ways. 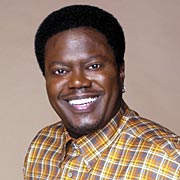 To call Bernie Mac and Mantan Moreland “sellouts” in the year 2007 is like trying to ‘persuade’ you that there is something wrong with the dudes behind YouTube, being a bunch of sellouts. A lot of dudes go into business for the sole purpose of selling out… Dudes—especially YouTube dudes—can think of a billion reasons to sell out. To eschew this “business strategy” on the basis of some kind of “racial solidarity” defies “logic” and “reason.” In view of this, let’s say that Bernie Mac has ‘surprising versatility’… Now, my respect shouts out to Cedric the Entertainer telling you up front: he is an en-ter-tai-ner. You will never mistake this brother for Paul Robeson. And my respect for Cedric is even greater because I did not catch him on tape talking about how unfair shit is and then see him one year later bugging his eyes out in a man-wig in “the tradition” of Mantan Moreland.

The Bernie Mac race-card-pulling can be used by the properly assimilated as an example of how “blacks get entitlements” by “talking jive.” What this can support is the deep, deep American desire to “prove” that the descendants of enslaved Africans “never really had it all that bad” in America and Bernie Mac’s “success” is a token example of that “fact.” This reeks of a very clever conservative Republican media campaign to make self-described “white liberals” who are sympathetic with issues “of color” look like big-city idiots who got tricked by a subway card game.

You won’t be fooled again, America! It’s better to error on the side of murder than to be tricked by these bounders—right? For more about the so-called “race card,” dig this, “Rarely Asked Questions, Volume One,” here at kintespace.com.