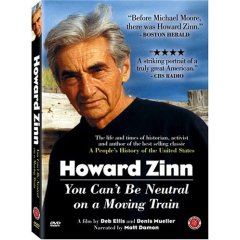 This short note is filled with praise for the documentary DVD Howard Zinn: You Can’t Be Neutral on a Moving Train and ideas for Matt Damon and his pals to bankroll a movie for “the next” Spike Lee. Some points about Howard Zinn that the DVD covers:

One of the most important items on the DVD is in the “Audio and Video Extras”—a very vital track called “Human Nature and Aggression.” Howard Zinn, a man who fought in “the great war”—a man of European descent—a professional academic is telling you that this notion of warlike behavior being “human nature” is utterly ridiculous. It should be clear to any person with memories of living with nature that the anteaters have never planned The Final Solution for the ants. What the anthropomorphic, white-supreme fantasies of Disney films suggest to small children is that the anteaters wish they could wage such a war. Too bad they’re not like “us” humans, eh? “We’re” smarter, eh? My prediction is that this and other “human nature” rhetoric will be accepted as more matter-of-fact, alien-from-outer-space talk by “average Americans.” Hey Average Joe, don’t laugh at those Columbians who spoke of the Earth being flat! Wait until you and your speeches go into future history…

It is being archived here on the Internet—as we speak…