Flippant Remarks about “The Constant Gardener” 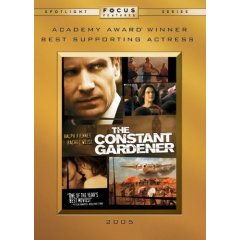 Director Fernando Meirelles, his view of the best-selling John le Carré novel, The Constant Gardener, strikes me immediately as the kind of Sunday-afternoon drama that should be on Exxon-Mobil Masterpiece Theatre. But, to have this quality of work and this kind of story, the show would have to be called like it used to be—just Masterpiece Theatre.

You know, the NAACP gives out these things called Image awards. Since yours truly was a nominee for best sound design a few years ago I was surprised at how many awards the NAACP gives out to self-described “white people.” This, of course, made me angry because in my ghetto ignorance (that is many, many times to me common sense), I assumed that the Negroes that put the N in NAACP were not looking hard enough for people with strong African features to reward and instead chose the easy route of appeasement and the illusion of being generous, intelligent, cosmopolitan and hip. But now that I’m a little older, I say fine—the NAACP should give out awards regardless of color and I look forward to finding out that industry professionals like Fernando Meirelles—and Boaz Yakin are duly respected.

The intelligence in the story The Constant Gardener is the message that, unless your trailer-park dreams are to be as rich and ignorant as that chick that said, “Let them eat cake” when you refer to “third world” issues, what affects “people of color” will eventually affect you—sometimes in very deadly ways. And the “you” I refer to are all of those couch plants leading “normal” lives in this here Eisenhower thang—this military industrial complex.

One detail (that’s important to me) is the way the DVD produces subtitles. The subtitles often match the position of characters and even their eye-line diagonals. The script is also very friendly to this format when the characters speak lines with only one or two words.