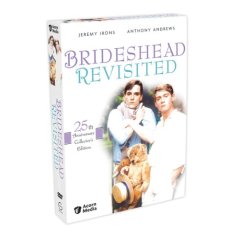 When Brideshead Revisited first appeared, on KCET Public Television, in my life, I was a young, frightfully intelligent, impressionable teenager. And when you read the words ‘frightfully intelligent’ you have to say it in a posh English accent from the 1920s. In the stereotypical Black Power conversation, I am not supposed to admit my extreme familiarity with such work as Brideshead Revisited—especially work with such homosexual overtones. Ah, yes, yet another Blog post that wins friends and gains potential customers…

As it turns out, it is not the Black-Power homophobes that threw me scraps of criticism for my curious, child-like investigations. No. It has consistently been the punk-ass Negroes who would worship and perform pretentious tea dances around work like Brideshead Revisited—and, based on superficial appearances, would never guess to this day that I am quite familiar with the foundational thinking that produces such work. These Negroes would like to console themselves that what they would call “my politics” is nourished on animal-like ignorance—quite the contrary little girls…

It is very important to understand that when I sat through the entire Brideshead Revisited series (~13 hours) as a teenager*,* I did so in complete isolation. There was not another human being in my life to share this experience. So, years later, when on a whim this series came to me in DVD format—with its audio commentary tracks—in my Netflix.com rental, it moved me to expectorate the following: