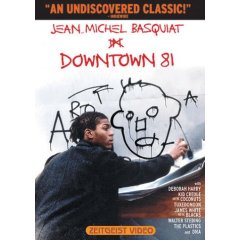 To me, Downtown 81 is the only film about Jean Michel Basquiat. My saying this means that Julian Schnabel will not be cool with me (and Jeffrey Wright too) but that’s okay because I’m sure he’s cool with Saul Williams (more on Saul later). And Mr. Schnabel being cool with Saul Williams means he is cool with me—even though he’s actually not cool with me—because Saul kind of looks like me so that’s close enough… It’s the wisdom of crowds scrambling for scraps of bread over the blood in the fields of their sacred coliseum. Plush safe he think.

But, dig, I’m going have to go with the great, great Prince, the content of his song “All the Critics Love U in New York.” When Prince screams out “take a bath hippie!” my eye sees David Byrne on stage shaving his beard—and my savage inaccuracy declares that David Byrne and the Talking Heads were biting off huge chunks from a band called DNA. And I’m seeing Tricky in a song called “Drum Mode” from a band called Grey—featuring Basquiat. To imagine how Basquiat would have fared in the music business, my compliments goes out to Tricky’s early, “dark” work—the work he later had to apologize for with a record company publicist saying some shit about low blood sugar problems. 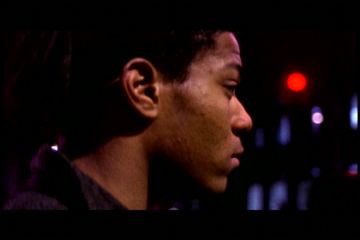 The incoherence of the previous paragraph is also saying that Downtown 81 was a film demonstrating just how close media people were to the talent. Art critics, magazine writers, music producers are all up in the film. My assumption is that this sort of ‘low class’ mixing is no longer possible—and only the relatively rich can enjoy such casual contact with present/future gate keepers. Even the locations in which the film was shot are now gentrified and paid for by Disney. The same thing is happening here in South Central Los Angeles—which is why Freestyle—the Art of Rhyme is going to be even more important in the future.

The Downtown 81 DVD has an extras section and shows Jean Michel on some grungy TV show not getting to hold the microphone. The symbolism to me is enormous. My ears catch glimpses of his voice and it is of timbre and vibe different from what Jeffrey Wright did a great job with—but Saul Williams doing the ADR for Basquiat in the film decades later was a cheesy, Pollyanna disappointment. The commentary track does not even mention the name Saul Williams which makes me assume that an actor was called in to do an acting job—and we must remember that Saul Williams is a professional actor. 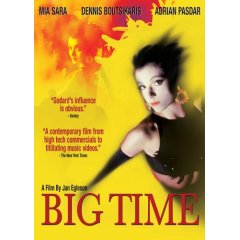 So once the Bag Lady Princess (played by Debbie Harry) gives Basquiat the suitcase full of money the rest is man dies, man dies, man dies. Many of these pustules, urine in the stairs and other details are covered by Julian Schnabel. The greatest scene in Julian Schnabel’s film, by the way, is the opening shot with Basquiat as a little boy in a gallery with his mother—she is weeping over Guernica while holding his hand—and she looks at him with tears in her eyes and we see the crown on his head. That was the most African, Haitian part of the film—the rest of the film appealed to a wider Avant-garde audience.

And, no, Mr. Schnabel you are wrong about that assumption about me: Basquiat had to have a “white girlfriend” because there is not one young American woman (I’ve heard of) with strong African features, since the time of chattel slavery, who would feel sympathy for a young Black man sleeping on the streets in a box—no matter how ingenious he is. The reaction that too many Black people have to genius is more complex and seems cruel, brutal and ignorant without careful examination. Such study is the responsibility of African storytellers—so, Mr. Schnabel, don’t sweat this… Of course you are probably not interested in these depths but the power of the Internet is holding a little sound recording called “girlfriend is paula cole” (the third track of “Invisible Man”) for your listening pleasure just in case…

Since I’m a horrible film studies professor, these are the films ‘influenced’ by Downtown 81 (even though this film was actually released in 2001):