Flippant Remarks about the Double Life of Véronique 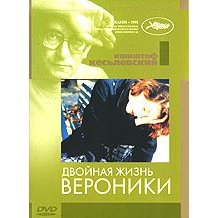 This Kieslowski film, The Double Life of Veronique / La Double vie de Veronique / Dvojnaja zhizn Veroniki, makes the “metaphysical work” of M. Knight Shyamalan look like an expensive but domestic Orange County Lutheran church play. With Veronique, Krzysztof Kieslowski solves hundreds of problems that too many seasoned, multi-millionaire filmmakers have not even begun to recognize. What impresses me is that he solves them in one integrated, structured, coherent system instead of resorting to what we call cameo appearances or gags.

Here are some of the Kieslowski solutions to problems real or imagined:

And, speaking of superficial, when you subscribe to the practical and realistic woman’s fight for domination in patriarchy, Kieslowski falls short. One message in his movie says that the woman who has multiple sex partners and values her exciting career over the relatively boring security of domestic monogamy (the gilded cage of the subtle exploitation of the muse polished by the adoring lover) dies. Experience informs me that many of the ladies of today are “too smart” to fall for this one.