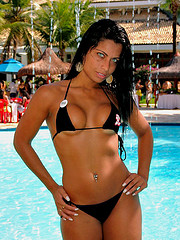 My introduction to this “mass exodus” comes from “African American Male Tourists’ Exodus to Brazil: Should We Care?” at blackprof.com. This leads to an Essence article by William Jelani Cobb, “My (Uncensored) Brazil Travel Diary.” Cobb writes, seething with anticipation:

The next woman to run the big-strong-handsome line on me is 5 feet10 inches tall with flawless skin and so fine I can’t stop staring. I’m in a club that works like a supermarket. A series of women dance onstage and you essentially pick the one you like. One minute I’m drinking with Chris, the bartender, and watching her, the next she’s off the stage, walking over and introducing herself. She says she saw me from onstage. The thing is, she doesn’t speak much English, so her introduction involves kissing me on each cheek and grabbing my hand.

I’m starting to think it’s not just sex that lures brothers here. It’s not just about how many women they sleep with or how responsive or skilled the women are. It’s also about being in a place where they’re surrounded by limitless sexual options. I’m told that men routinely pick up two or three women a night, which the rate of exchange makes affordable. Ain’t no brother in the States rolling to his crib with three women unless Pharrell produced the first single on his album or he just scored 41 points against the Lakers. Which is to say, this is not about my being big or strong, but about the dollar being big and strong. Now whether the brothers want to admit that is another thing entirely.

William Jelani Cobb then goes on to remind us that:

I just saw a group of 10-to-12-year-old girls on the strip. They’re glue addicts. They have sex with tourists. They don’t require condoms. There’s real poverty here, and shit ain’t always pretty.

It takes the typical Roman dominator ignorance to pretend you don’t see this poverty and concentrate on the upscale commercial companions (unless you are into straight-up Roman domination). And I have to ask myself, ‘Bryan can you do this?’ Is it possible for me to, say, rent an apartment (with female companion) for a week, enjoy sensuality and leave?

According to “Sex, Brazil and the Brothers” by Richard Prince we must remember the ‘official’ facts:

“Approximately 70,000 Brazilians, mostly women, are engaged in prostitution in foreign countries; some are trafficking victims. Child sex tourism is a problem within the country, particularly in the resort areas and coastal cities of Brazil’s northeast.” The department put Brazil in its “Tier 2” category, meaning the country is not fully complying with minimum standards for fighting trafficking. 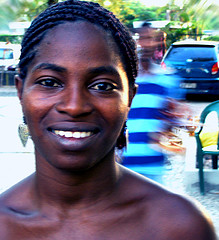 One thing that is certain about me is that even my ego, I, do not enjoy engaging in sex while other people (apart from my, one, female sex partner) know that my intercourse is taking place. Gang-related sex, where a group of males share a single partner (at the same time or across days, weeks or months) was never my thing—because I come from the nerd camp, not the jock/soldier camp. These comments do not suggest my “moral” superiority over the jocks and soldiers. I’m just telling you what happened and how my thang is set up because of what happened.

What would be very, very interesting to me is to read a report from a tall, lean, stunning Brazilian woman with strong African features who is a working professional (in a field unrelated to the oldest working profession) trying to live her life in such a tourist culture. Does she have stories about being mistaken for a prostitute? (When my father went on vacation in the Bahamas in the 1980s he was mistaken for a gigolo by female sex tourists.) Does she prefer Black men (in spite of her professional education) because she knows we make “strong love”? Does she have a relative that chose a life of sex working and can make startling comparisons and contrasts?

yea, even though there is a lot to do over there people do go there for that one reason. But you can say that abut anywhere. The Dollar right now is actually 1 to 2.35 as oppose to when this article was posted which is was 1- 1.81. Good news for american tourists. lol