One Physically Attractive Woman and Her Mobile Phone 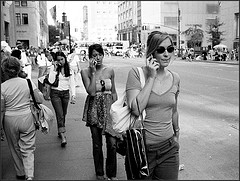 In “Few Game Tips for Brothas Going to the For Sisters Only Event,” technologist Ed Dun (interviewed here at kintespace.com) brings up what is called “the cell phone chick.” In an effort to be honest with myself, the assertion here is that our concern is with the physically attractive, female mobile phone user. I notice that she is talking on the phone all the damn time. And when males or females bring it up to her in jokes and other painless angles, she will just laugh and console herself with some shit about our jealousy. So let’s look at my jealousy (and supposed resentment).

First, let me be as objective as possible. Let’s go into the physics—specifically the acoustics—of the mobile phone lady. Usually here in Southern California she has that tinny, Valley-Girl voice (regardless of so-called “race”). This is actually to her advantage on the noisy, crowded streets of L.A. The high frequency of her female voice means she can be heard over most background noise—and when you assume that she is listening to another female with a standard-issue Valley-Girl voice, there will be no trouble hearing who is talking—there are even a lot of guys out there with high voices and piercings that are “sooo cute.” But for us brothers with our “ominous,” deep voices, we get a lot of “what?” and “huh?” So certainly I must be resentful of that.

Now, what about the economics of the “cell phone chick”? How is she paying for all those minutes? Without talking about debt, let me try an optimistic list:

On the other extreme, some women crave attention—and being on the phone is just the ticket to get attention without looking like they want it. 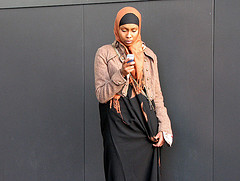 In the realm of anthropology, women are society—and a society thrives with information—the quality of which degrades quickly into gossip. So some may argue that female humans are genetically predisposed to talk and gossip as much as they can in a quest for information (and organization). This is a wise-woman path to enlightenment and grass roots movement? Oh, wait… I’m not supposed to be optimistic… So let’s get back to intrigue and capitalism: 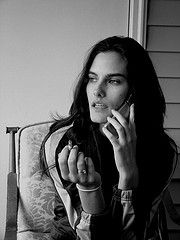 Some attractive women are on the phone because many, many people want to talk to them… for… various… reasons… The mobile phone is a traffic-management tool that such a woman uses to regulate her social relations. A fine woman has to audition a boat load of what we called back in the day, “drag”—a dragnet used to captivate her in a sensual game of what she would call her “life.” Some dude with a high tinny voice (sooo cute) has to lay down his drag (that’s one day’s conversation) and then she has to get on the phone and detail dude’s drag technique with her bestest friend (that’s another conversation)—and let’s not even get into text messaging…

So it should be no surprise that many of these “cell phone chicks” pity guys like me with condescending brevity because our traffic flow is nothing compared to the popularity meter peaking with her peak minutes. Surely, I must be hiding deep, deep resentment for the swirling world of bizzyness beyond my reachy reach. In a mono-culture everyone wants to be her, right? That’s just the “real world”…

Since my “cell phone chick” is not (and never will) take my call and listen to what Bryan be saying (and draggin’) let me tell you what makes me jealous:

Prior to cell phones, it was a time when cigarettes where the social fad among women to occupy themselves in solitude. Little is publicized about the high rate of death due to lung cancer (1 every 10 minutes) from that generation.

Today, instead of lung cancer, it appears that a lot of brain cancer will going to be the result of these women putting that frequency-emitting device next to their head, near their ear (the most vulnerable) in the same of appearing fashionable...

About the green-bikini-top sister: damn! Some women won the right to be equal with men with a beer belly. Women's "equality" with men is truly a slovenly, shuffling, chauvinist, pig-hoof step downward.