In “The lost 40 acres” at popandpolitics.com the numbers tell no little white lies: “One report demonstrates that black kids born to middle-class parents in the late 1960s have had a difficult time as adults maintaining their middle-class status. Forty five percent of them, according to the report, have fallen into relative poverty. It’s been the opposite for middle-class white kids, among whom only sixteen percent have dropped into lower income categories.” Here is a more objective reason why prominent Negroes are quite offensive when they make seductive attempts to describe “race” issues within the frame of a solved problem. My assertion based on personal observation is that once we reach the so-called middle class, we tend to assume that things can run on autopilot—so we can just drop “the kids” off at the upper-class school and pay taxes and just assume these children will magically be educated simply because they are surrounded by the trappings of wealth and European concepts of privilege.

Mwalimu Baruti of Atlanta, Georgia has something to say about this issue in the LIB Radio sampler, “Three Sons of Africa.” 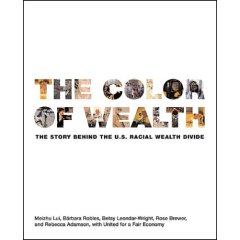 Deborah Gabriel: “Black Britain examined the report written by Julia Isaacs from the Brooking Institution, who examined Census data and made a comparison between family income of parents in the 1960s and their children’s income in the late 1990s to the early 2000s. The findings make grim reading. While the offspring of white middle income families are able to earn more than their parents did, for black families in most cases the opposite is true. The findings reveal that the majority of children from black middle income families actually earn less than their parents.”

This is issue was touched upon in “The Color of Wealth” in this journal.

Since I dislike forcing people to “register” on a Web site just to read a stupid article, my point here for linking to “Young Women and Tobacco: Hope for Tomorrow” by Elinor Wilson, RN, PhD was to find new documentation for my old view that sees people that smoke cigarettes as people who have ‘no feelings.’ So many articles came up about numbness in the hands and feet but my old view was seeing something deeper. Elinor Wilson writes,

Women often seem to use smoking to suppress negative emotions such as anger, rage, and jealousy. Suppressing anger has been described as “sucking back anger.” Independence is a strong theme that also emerges; women who smoke may be seeking difference or rebellion. Seeking conformity and desiring comfort are also apparent reasons for smoking. Women have described cigarettes as “the best friend they ever had” and “the most dependable partner they ever had.”

Many times I was accused of being “superficial” for not being attracted to a woman simply because she smoked. But the documented evidence tells me that this “little” thing is an indicator of a huge gulf between the smoking woman’s inner self and the presence of another person.

“The End of the World”

William M. H. Kötke declares, “We are all looking at the end of the world as we know it… This is the culture of empire, a culture of growth and imbalance. Its main tenets are patriarchy, hierarchy, materialism, and militarism.” I honestly did not expect people to write so articulately and specifically about this for the year 2007 on the Internet. Usually this kind of writing is referenced in a book written years ago.

There is agreement between my world view and that of Kötke. However, the world “ended”—that is, true civilization ended thousands of years ago, when Africans had no choice but to found the first empire. It was only a matter of arithmetic as to how many millennia this ending would end. One horrible revision of history by imperialists of the future is that children will be led to assume that the ozone layer was “destined” to be gone and that the Sun “naturally” causes skin cancer. This will force people to live in high-tech caves and Europeans will be right at home in such an impoverished situation of intense scarcity.

Some of these apocalyptic issues were touched upon in “There was a war. You lost.” in this journal.

I was working on a post to put up the news article on black Americans and the "40 acres and a mule" report by Gates that I read in this Sunday's paper. I will still put it up and link to you to send some readers your way.