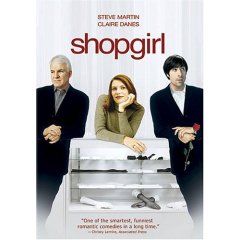 I have mentioned in this Blog that I get tired of watching pictures of white people thinking—and no matter what great things I could have done for Hollywood—it is my “strange” determination to make these comments in public that is so “tragic” for the condescending Negro who would think that I am “too scared” to “prove” myself to Hollywood. So many very talented, brilliant people around the world hate Hollywood with so much informed articulation that these haters that came before me have cultivated in me indifference and a nonplussed form of despising. I’m from Los Angeles. I grew up here. Hollywood is a little different for me.

So Steve Martin’s Shopgirl is not just a bunch of pictures of white people thinking. First of all, Steve Martin is talented enough and humanoid enough to actually be more than a white person (for a time)—which is an incredible compliment coming from me. He is a childlike force that brightened my childhood—and he has matured to tackle subjects of gender and class that many a seasoned Hollywood player would call “too difficult” for film. I leave it as an exercise to those in the know who was that guy that said “we” can’t write scripts for women. Or female roles in Hollywood are “problematic.” Steve Martin shows in one “low budget” film made on location in Los Angeles how much of bunch of bullshit this position is.

You see, kids, the “problem” of writing roles for women in Hollywood is the “problem” of revealing how old patriarchal males have sex lives based on their material wealth. Compared to Pretty Woman, Steve Martin’s Shopgirl is a Marxist graduate student thesis on how class differences permit the exploitation of women. But on a more basic, personal level, Steve Martin’s Shopgirl is the kind of film I would have made to convince my aging but increasingly paranoid wife of 40 years that cheating on her is a waste of time—this is based on the assumption that I would actually have a paranoid wife of 40 years. My ultimate downfall may be my impatience with the insecurities of grown-ass people. These people outnumber me and can answer my impatience with level of self-defensive cruelty that resembles the razing of Fallujah.

You see some women think they are “smart” and they know that “men only want one thing”—and I can only hope the hope of the captive that Steve Martin did not find out the hard way that, in spite of making this film, the important women in his life still don’t trust in his sincerity (as these women announce to the world otherwise). They still would carry the insult about how processing female bodies like bodies in a meat factory (or even a morgue) is somehow every “real” man’s “destiny.” What these “smart” women fail to recognize—and there is no fucking excuse for “smart” women who dare to describe themselves as African—is that this one-thing view of maleness is based in patriarchal (Indo-European) models of reality and is celebrated in fascism. So when one extreme “smart” woman says that “all men” are born to be patriarchal fascists, what she is doing for me is revealing not her contact with the universal wisdom of the ancestral ages but the squalid little ethnic origins of her thoughts—an ethnic origin without regard to color of skin.

So Steve Martin’s Shopgirl would be an excellent tool of discovery for those as “sick” as me. It should be very non-threatening for your Negro friends. They would feel safe discussing this film and perhaps casually reveal their true ethnic origins in spite of all the expensive African gear.

The most important scene for me in Shopgirl is when the Steve Martin character sits down in the girl’s apartment. His eyes dart about… It is at this moment when the loneliness for the predatory male can be greatest. The truth of the matter is that he despises all of the poverty around him. He would despise himself for going to such “low” levels just get some ass. He would have to bite his tongue and conceal his condescension for the young girl. He would have to pretend to take her achievements seriously. He would have to wait patiently for certain levels of cognition to activate so they can actually share space and time together—but he does not want her to actually get there because she will discover how much he despised her. He has access to her body but that is not enough when you are an actual human being. Some women think men can never be human beings.

And of course the young woman should sense his condescension. It becomes so obvious how much he has accomplished compared to her when she sees his house and listens to him speak. Her formation of a reaction to his obvious material supremacy can range from a straight-out form of prostitution/espionage to a sincere, functional, holistic disregard for the material world. Most “real people” just get drunk (or worse) to suppress all of these inconvenient feelings.

For me, these physical, pornographic, solo-fantasy relationships are locked into a level of consciousness that is extremely limiting. For some reason, it’s real “macho” to have the power to astral-project orgasms—and it is to these “meta-physical” levels the “lovely couple” should strive for… we may never get there, but it is supposed to be a heaven of a lot of fun trying…