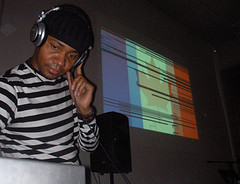 Before I go off and say something “bad” about DJ Spooky, it must be said that he is the guy who turned me on to Amiri Baraka’s “Black Dada Nihilismus”—a spoken word piece that became a very creative Spooky remix that I am still unable to get (again) in MP3 format. This introduction to Amiri Baraka is very important to me. Sadly, no matter how many times I say what was important to me, my assumption is that DJ Spooky, being a “sensitive” American artist would be, “tuned out” to any critique coming from me—since it is clear that the value of my critique is not worth the paper most will not print this Blog post on…

Yes, DJ Spooky is not just an artist—he makes it editorially clear that he is a conceptual artist. And this means to me that the concept of Amiri Barka’s spoken word revived and updated for the “youth market” is a great idea from a great dude. So now, according to “Spooky ice,” the concept of DJ Spooky in Antarctica is also supposed to be great. These are the conceptual nuggets that I am supposed to grasp:

“I’m going offline for a while ’cause I’m shooting a film in Antarctica for the next couple of weeks. If you have a moment, check out the trailer for the film I’m going to shoot there: every sound in the film will be made from the sound of ice (environmental, geological, magnetic, atmospheric etc). I’m bringing a mini-studio with me to edit, shoot, and score the film. It headlines Sundance’s Digital Film section this January.”

None of the concepts embedded in the ice above pique my interest. It must be because I am Black—therefore “limited.” So here are some more embedded devices: