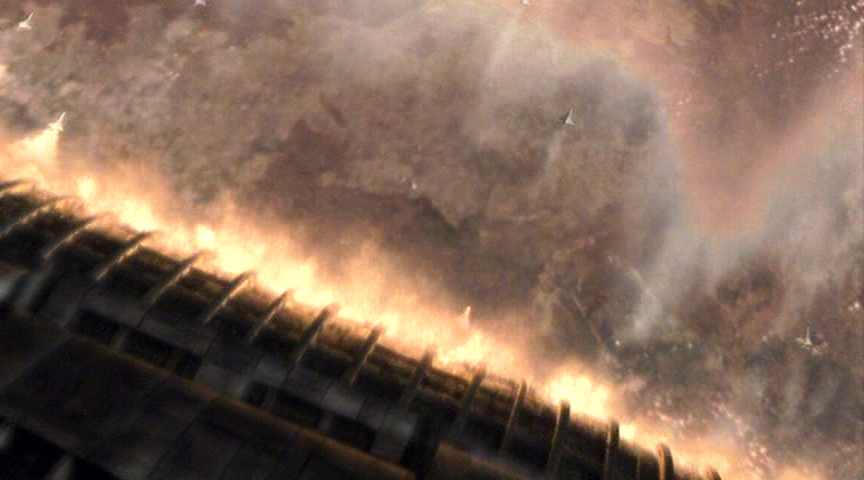 This image is from a “special effects” sequence that is one of the best set pieces of dramatic space flight I have ever seen. Oh, yes, I am sure you and that cute Aussie chick from fxguidetv can find numerous examples of technically superior shots. But what moves my heart is not inhuman advanced Western technology. What makes a “special effects” sequence powerful is that it crosses over from “special” and not only “helps to tell the story” (another worn cliché) but also helps to reveal the character of the dramatis personae. When you look camera-up into a huge freaking several-million-ton fireball ripping through the atmosphere, you know that the great Edward James Olmos, his character, Commander Adama is riding that mufukka. To find out what happens later you can just remember or take a look at Battlestar Galactica Episode #304—“Exodus, Part II” (Season 3). On the DVD commentary track, Ronald D. Moore starts to sound like Spike Lee as he gets fired up about watching this sequence again:

This is tremendous effects work by Gary Hutzel and his team. And it’s just going, going, going, going. And then at the last second it jumps out. Now watch all this. This is, like, visual effects a-go-go. And we better win the frakking Emmy for this, this year, or I’m gonna, I swear to God… We had some internal questions about the technical feasibility of Galactica jumping into the atmosphere and falling through the—falling like a rock through this. You could argue it either way. Its science fiction so who knows what Galactica’s made of and the structure integrity, etc., etc. My logic was, “Look. If Galactica can take hit from a nuke, and keep on moving, which we established in the miniseries, and still be OK on some level, this is a tough motherfrakkin’ machine.” I can buy that it has enough structural integrity to fall through that atmosphere. It couldn’t maneuver. It can’t fly. That’s not what it’s designed to do. But I bought the idea that it could hang together long enough to just fall straight down and then launch its Vipers and then get the hell out of there.

This image here shows that not only was Adama riding the fireball, he was giving commands at the same time—commands like, “…launch the vipers!” You may ask what the hell does this have to do with Avery Brooks? Well, you might be a cute Aussie girl faced with the task of interviewing Ronald D. Moore. Instead of stroking him with the typical white-bread fare, you can ask him a question like, ‘Do you see a relationship—key moments in your professional growth—working with great “leading men” actors like Avery Brooks and Edward James Olmos?’ 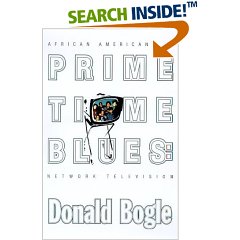 This would be a hard question to even think of asking in the traditional racist Hollywood setting because a Black dude like Avery Brooks is supposed to be forgotten. He is just so damn good—and making such an anti-racist show like A Man Called Hawk (that is still not on DVD) doesn’t “help” either. But something had to happen to Ronald D. Moore while he worked with this man as a producer for Star Trek: Deep Space Nine. According to Internet Movie Database, that’s 64 episodes from 1994 to 1999.

One thing I do notice about Ronald D. Moore. He has moved rightward from the left-wing liberalness some can find in the Star Trek franchise. My savage guess is that the most “offensive” premise in the Star Trek universe is that the economic system we enjoy today under pres-o-dent Bush was done away with long ago… We need some “real” science fiction! Enter the new Battlestar Galactica. Shoot Bill Duke in the chest at point blank range to let no one doubt that any left-wing sentiment is done! Here are some random points at the end: