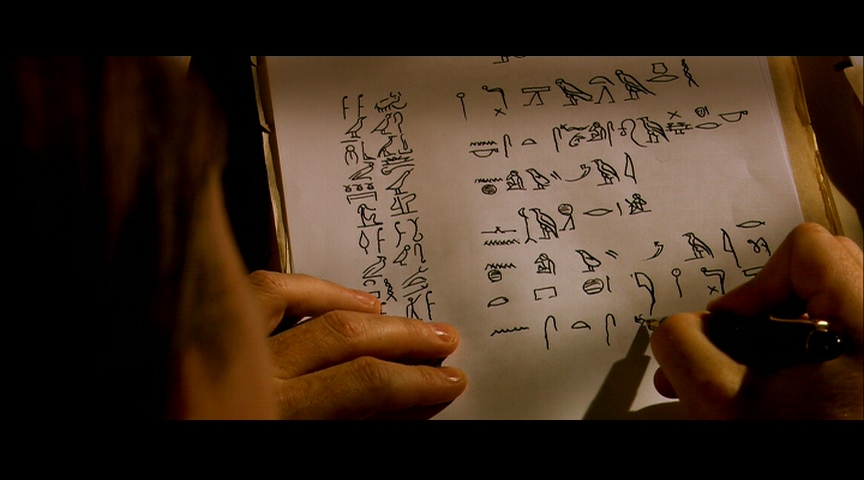 This is the shot from Francis Ford Coppola’s 2007 release, Youth Without Youth, where our hero is jotting down in ancient Egyptian what our heroine is raving about as she journeys “back” in time through language. Critic Jonathan Romney writes:

Veronica, it appears, is regressing through the history of human language itself, occasioning a brief scholarly dispute between Dominic and his Double: “This is Sumerian” “No, it’s Babylonian.” The polyglot professor rises to the occasion, and painstakingly transcribes Veronica’s Ancient Egyptian babbling, in hieroglyphics, no less: a delicate business, because it’s so easy to misquote someone if you draw the jackals’ heads wrong.

Yes, quite a delicate business—especially when there is debate to this day about what any ancient Egyptian words sounded like. Also, how can the sound of what she is saying suggest how the words should be positioned? Notice in the frame above how there is a column of words at left next to the runs that appear left to right. This is just the beginning of Francis Ford Coppola overreaching.

This film is based on the novella of the same name by Romanian author Mircea Eliade. Along with some right-wing writings on “Shamanism,” Yoga, Eliade comes equipped with the concept of Eternal Return and the “Terror of history.” The Wikipedia.org article says that:

Eliade attributes the well-known “cyclic” vision of time in ancient thought to belief in the eternal return. For instance, the New Year ceremonies among the Mesopotamians, the Egyptians, and other Near Eastern peoples reenacted their cosmogonic myths. Therefore, by the logic of the eternal return, each New Year ceremony was the beginning of the world for these peoples. According to Eliade, these peoples felt a need to return to the Beginning at regular intervals, turning time into a circle.