The only game in many, many towns is Liberator Magazine. I ordered my copy of Liberator 8.1 because of the thought-provoking article “Past Afrocentricity” by my new Facebook friend, Lafayette Gaston. This article has two issues that jumped out at me:

So let me drop the bombshell: I was under the impression that Diop was allowed to defend his first doctorate theses at La Sorbonne. It definitely follows that I rushed toward the footnotes of this Lafayette Gaston article, looking for the details. There are two sources cited: one in French not in my possession and another in my collection—the 1986 James G. Spady article “The Changing Perception of C.A. Diop and His Work: the Preeminence of a Scientific Spirit” in Great African Thinkers: Cheikh Anta Diop. Until I get my hands on the French source, I can definitely say I have no explicit reference to the details. However, the Spady article has a quote from James Baldwin about Diop that is astonishing:

The evening session began with a film, which I missed, and was followed by a speech from Cheikh Anta Diop, which, in sum, claimed the ancient Egyptian empire as part of the Negro past. I can only say that this question has never greatly exercised my mind, nor did M. Diop succeed in doing so—at least not in the direction he intended. He quite refused to remain within the twenty-minute limit, and while his claims of the dishonesty of all Egyptian scholars [sic] may be quite well founded for all I know, I cannot say that he convinced me. 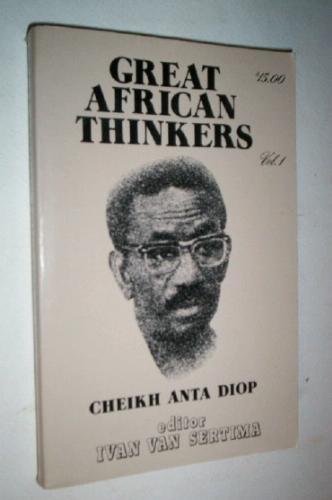 So this missionary position taken by Baldwin surprised me at first. (And, yes, you may ask, “How could a book in his collection surprise him? Isn’t the great Bryan reading his books?”) But then it began to make sense: how can James Baldwin return to Giovanni’s Room and accept Diop at the same time? Certainly, such a split would be schizoid. You see, kids, some people just grow up watching American Idol and others have to build a sophisticated intellectual framework to actually decide to watch American Idol—and James Baldwin clearly would be one of those intellectual people.

Let’s try another approach: when bell hook’s allegedly said (somewhere in the 1980s–90s) that Oprah Winfrey sucks white dick—I assumed such an aggressive, non-Buddha-like statement was symbolic, referring to a way of thinking. In the case of James Baldwin, the shit is fucking literal. It is common sense to not want to lose your real and present social life over some “black dogma”—James Baldwin was tossing salad of some real shit and would have to live his life as a chaste priest after failing to get his “friends” to go along with Diop’s news—after realizing what his “friends” really think about him (slave ship cabin boy) after trying to “share” Diop’s news.

But don’t diagnose my homophobia as paraplegic. First of all, when visualize homophobia—I don’t see the genius of, say, Keith Haring being tragically ignored because he is “gay”—I see a prison gang rape by crazed body builders—grown men attacking a juvenile—this is the imagery of homophobia for me. Secondly, even after finding this new shit out about James Baldwin I will still cite his series of black-and-white-television interviews about racism as the benchmark for all Black celebrities. James Baldwin’s celebrity is galactic units ahead of anything coming out as “talking about race” in media today…

There are 21st-century, young, self-described “black” people who still think that “all we need to do” is open a “public dialog on race” and the world will change. These kids definitely have not seen James Baldwin on national television over 40 years ago doing this exact thing. And now that I am a little older I accuse the bleeding-heart liberals that put him on television as being slightly attracted to Baldwin for less than idealistic reasons. There are few white things more delicious than knowing that the “black man” you are talking to about the freedom of what we assume to be straight Black men (statistically speaking) literally sucks white dick. Kids, there is a sense of white, upper-class humor you know little about…

Bryan, thanks for using your library to supplement the conversation. With permission, I definitely plan to repost this over at LibMag.com