Abdoulaye Ascofaré and the Film That Touches Me Most 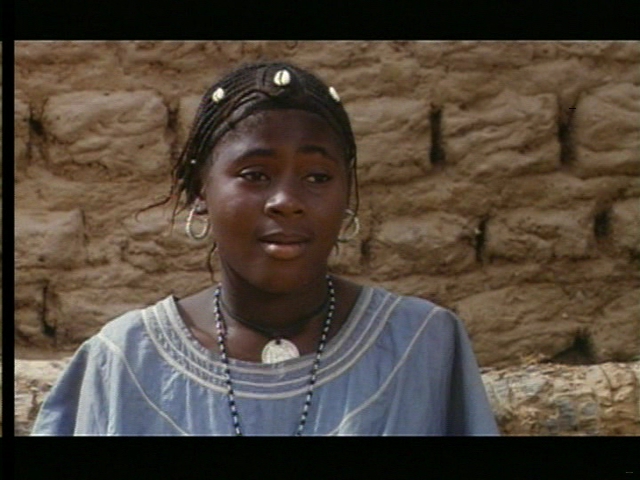 Abdoulaye Ascofaré, a Malian poet, released Faraw, une mère des sables in 1997. It won the Belgian Golden Bayard for Artistic Creation in the same year. I was only able to see this film here in the U.S. in the “Great African Films” series, released on a double-feature DVD as Faraw: Mother of the Dunes from Artmattan Productions.

With Faraw, une mère des sables, a Malian poet writes a poem with light about a 20th-century mother of Songhai (or Songhay). For me, this film touches me the most as it does not show us a distant past (which I actually prefer). Rather, it makes excellent statements dramatically set in a present that will last well into the future. 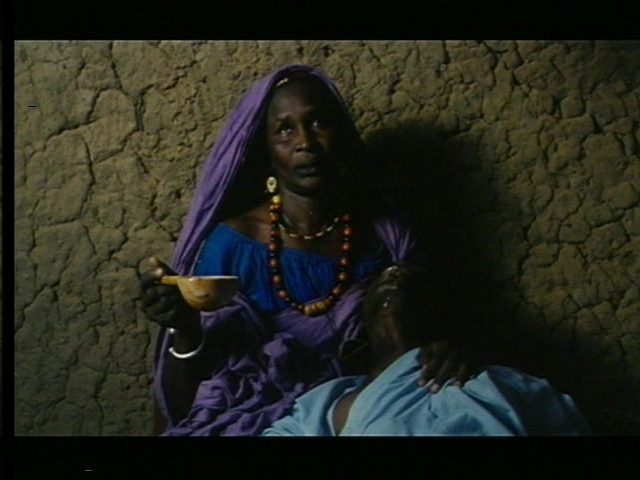 An image of a girl’s face, to me, rides the wave of this future. I have never seen a more powerful cinematic statement that is so relevant to my personal world view. What we have here is a young girl, the daughter of our mother, Zamiatou. She is filling her eyes with the sight of a young, male, European tourist. She is watching him from a distance. A particular situation has placed her in this position. This position is what I call the ‘missionary position’: her heart has no choice but to embrace this European person. This young girl can grow up and become, say, MP for the Liberal Party in the Netherlands—become a highly-educated, highly-intellectual Westernized powerhouse. My argument, which shall not easily be explicitly reduced to the absurd but only ignored, is that compatibility with assimilation into a European-dominant society correlates with memories similar to the poverty we see in the eyes of this girl. 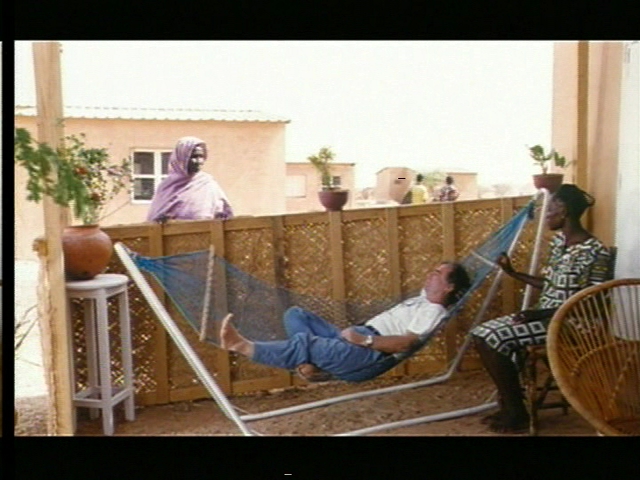 What I am saying is that everything is taken away from this girl’s home, starting with the mental destruction of her father—and in this power vacuum the European influence can penetrate. What makes me look like the angry Black stereotype is my scowl—but my distorted face is not for the European but for the assimilating peoples of color around the world who aggressively assume that they chose the Western way. Like there was a level playing field with rules you can explain to any innocent child with a healthy education—and in this “fair” game we get the Munich Olympics. For these people, admitting or implying that they had a choice is far better than admitting how little they had in the first place—admitting how much was stolen from them before they were even born. 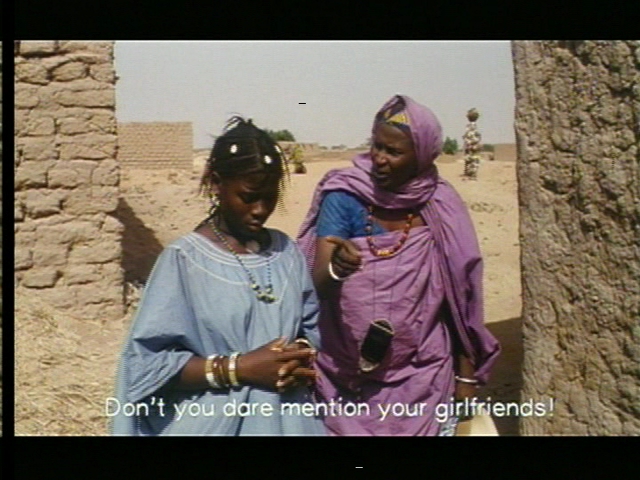 The young woman, a “house keeper,” sitting in this scene, rocking her white benefactor/molester, might rationalize that she is there because she chooses to be there. This peculiar missionary training could be so thick that she might not be able to imagine anywhere else to be. Without any help from any cartoon-villain European ‘priests,’ pious for this modern missionary system, she and other “employed” girls brag about their earnings and new Western ways. Clearly this ‘gospel’ reaches Zamiatou through her daughter’s misplaced admiration. Zamiatou cannot tell her virgin daughter about whoredom—yet she is only feet away from it. In this shot, Zamiatou does her best to warn her daughter without vulgarity: “Don’t you dare mention your girlfriends!” 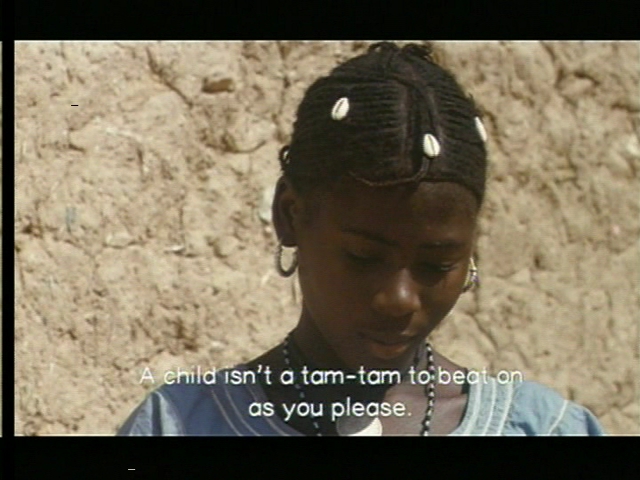 The images I’ve selected to write about this film make Faraw look like a film about the scolding of a girl by her mother. And I must admit my personal American biases made me assume that all this scolding would be ultimately ineffective. My next pick does not help: Zamiatou tells her daughter after she is caught beating on her little brothers, “A child isn’t a tam-tam to beat on as you please.” I know this is more scolding but I just had to capture this image for the novelty! When an African character makes a statement like that you know you are not watching Black American cinema! Zamiatou represents the old, old ways surviving in a most systematically cruel world.

A communal scene suggests that Zamiatou is not alone. Abdoulaye Ascofaré was one of the last soviet-era-educated African filmmakers. So certainly the collective efforts that Zamiatou engages in to save her family from ruin can be dismissed as Marxist ideology instead of African ultra-conservatism. 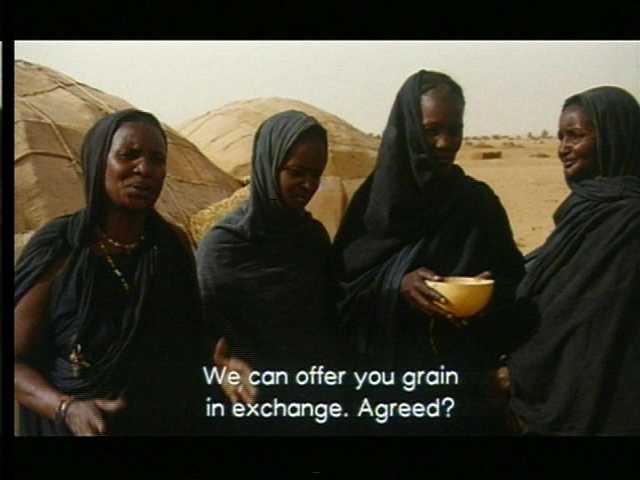 The ending of this film may not be “realistic” but I definitely did not feel used or led astray by political grandstanding. This is one of less than five films that brought me to tears—and that is hard thing to do. This lack of free emotion is nothing I’m proud of… but I am very proud of this narrative poem as film.

For those with little feelings for such African works, you might dig into a similar artistic story of third-world girls faced with sex slavery. See Lukas Moodysson’s Lilja 4-ever. The first act of the film features a heart-wrenching scene where a mother abandons her teenage daughter. I had to stop watching the movie for weeks before I decided to finish the film.

It is interesting to me, placing this Estonia-set film in same place with the Malian film. It is just possible Abdoulaye Ascofaré would not have imagined that, in the Eastern Bloc region of his film education, young, European girls would face similar devastation to the ones in his Africa. According to our attitude with just mild dose of European cynicism, Lukas Moodysson’s directs the story that has the more “realistic” ending—but I still prefer the reality of Abdoulaye Ascofaré.

The film recommendations in this post and on this site in general recently [i.e. http://kintespace.com/rasxlog/?p=1965] have been very valuable

The analysis of Faraw! is surprising and refreshing. I teach Africana culture, literature and film and decided to teach Faraw! as a complement to Ida Mae Endesha Holland's From the Mississippi Delta and Toni Morrison's Beloved with the goal of better understanding woman's relationship to her vagina, her children, and her multilayered history as well as the "ruint"/righteous dichotomy so many women find themselves straddling. Also, because every semester in every class I try to convince my students to not beat their children (as well as to stop using the n-word) only to find that my students argue, find justifications, and embrace self hatred married to and manifested in linguistic and physical violence, I thought Faraw! was an excellent choice.

While researching information on Ascofare I stumbled into kintespace. Thank you! Your analysis of Faraw! is spot on--from the objectified's gaze on those she hopes to be objectified by to how traditional African child education and rearing differs from our backward and slavemaster-derived child indoctrination techniques. I referred my students to kintespace, which, on the whole, I find profound, funky, introspective and cleansing for author and audience.

I would love to read your thoughts on Yeelen by Souleymane Cisse, which I consider to be one of the deepest films ever produced.

Many thanks! Yeelen, is in my personal collection and I do plan to write about it from a very narrow point of view.

my dad made this movie, im working on making him more involved online and perhaps do more movies. since he retired he has more time for his passion! Nice post

Your Dad is a truly great creative force. I'm looking your name up in the usual places so I can follow you...